Italy’s recent elections featured the return of legendarily corrupt, thrice-indicted bunga-bunga enthusiast Silvio Berlusconi in a three-way tie with a comedian and a career politician – only a few days before his conviction and sentencing on a corruption charge. The juries are still out on his other pending charges of sex with an underage prostitute and tax fraud. 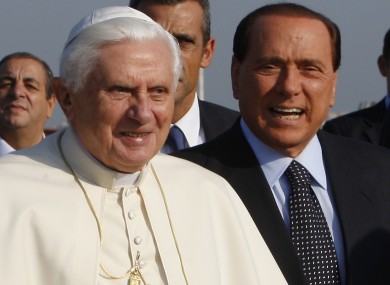 Zooming into the country within a country, Italy’s legally distinct Siamese twin the Vatican also is roiled by sex-and-corruption farces and tragedies that have led to the first and only Nazi pope clicking his red Prada heels as he relinquishes the divine right to pontificate.

Because the Italian state has proven so adept at self-governance, Milanese archbishop Angelo Scola was the pre-conclave frontrunner for the papacy – until his offices were raided by anti-mafia police over corruption charges in the hours leading up to the first vote. The candidacies of Brazilian and Angolan clergy also raised the tantalizing possibility of a pope who more accurately reflects the modern, global south oriented face of Catholicism; but in the end, the cardinals split the difference and chose an Italian from Argentina, 33-to-1 dark horse Jorge Bergoglio. Beyond the personalities, however, lie deep-rooted structural issues of modernity and morality, wherein the horrific abuse of children and demonization of women has led to a subsequent global collapse of both authority and funding that must be resolved if the Holy See is to survive.

Significantly, the College of Cardinals who made up the conclave are themselves implicated in many of the worst of these abuses. Bergoglio, who took the name Francis I, also has his share of quickly unearthed skeletons, both individual and systemically shared with his brethren. For instance, per reporter Marco della Cava,

“The word that spread Friday was of Pope Francis’ actions during Argentina’s “dirty war” between 1976 and 1983, when the ruling military government abused and killed countless citizens suspected of being Communists. At issue is whether Jorge Mario Bergoglio, then a young priest in his 30s…was complicit in allowing two Jesuit priests, Orlando Yorio and Franz Jalics, to be apprehended and tortured for five months.”

Rumors swirled, fueled by different agendas – from glowing reports that the new Pope had hidden and perhaps saved the priests’ lives, to sinister assertions that he had not only given them up, but had actually participated in their brutal “interrogations.” Father Jalics, the lone survivor, issued a statement that forgave Francis, but declined to exonerate him, closing the investigation in a disconcerting but presumably final manner.

Pope Francis – because when you need to hide a German, hire an Argentinian. #conclave

As troubling as the shadowy allegations from the Dirty War are, however, non-war-crimes related revelations pose an even greater existential threat to both his papacy specifically, and the Catholic church at large. Though the 76-year old Bergoglio’s history of advocating for the impoverished in Latin America shows great promise, his conservative approach to other issues of social justice are closely in line with his demographic and peers. His attacks on gay marriage as “destructive to God’s plan” in 2010 were so vitriolic, they were widely considered to have backfired, boosting the efforts of pro-equality activists in Argentina.

Similarly, a range of experts from Bergoglio’s biographer to Vatican insiders have unanimously affirmed that when the Cardinals say they want ‘reform,’ they are not referring to ordaining women into the priesthood, green-lighting contraceptive use, or prosecuting those within the Church who covered up abuse and shuffled child-rapists from parish to parish. In other words: the anachronistic, doctrinal cancers that are currently rotting Catholicism from the inside will remain firmly in place, at least for the 5-10 years that the elderly Francis is likely to serve as the infallible mouthpiece of God.

Pope Francis waves to the crowd from the central balcony of St Peter’s Basilica at the Vatican. Photo: AP

If he can tackle the hornet’s nest of Italian politicians in priest’s robes within the Vatican – and that is a very large if, both in terms of sheer historical difficulty, and in the face of mounting evidence that Benedict intends to play the Putin to Francis’ Medvedev – there is a significant chance that Bergoglio can at least lay the groundwork for genuine reforms within one of the world’s oldest, richest, most corrupt and most influential institutions. If he is successful, perhaps he will allow the Italian Senate to copy his homework as they attempt to institute a prime minister who is not both a convicted criminal and a global punchline. And if not, at least Rome and the Vatican are conveniently located for access to non-stop bunga-bunga parties.